How to create useful tools to aid surgical training

Beginning with simply a sheet of plastic and a heat gun, the team at Inovus Medical has come a long way since the development of its first laparoscopic simulator.

The St Helens-based team is expanding, with much of its manufacturing done in house. While it builds its own simulators to allow junior doctors and surgeons to practice procedures using digital aspects, augmented reality and virtual reality, it has also started to develop its own electronics and materials behind the use of medical devices. This year alone has seen £1 million investment going towards another augmented reality system.

Elliot Street, Inovus CEO and co-founder, worked as a junior doctor in the early years of the business. His co-founder, Jordan Van Flute, had only just graduated. Addressing how the company began, Street said: “What we wanted to do first was answer an unmet need which needed to be answered. We wanted to answer it affordably and we set up a company where we had to really hustle, and no-one would hear of us apart from the exact end users using the kit.

“All we were going to do in those first five years was developing really good kit in front of the people who need to buy it.”

The “kit” Street refers to was at first just a plaster box with a webcam in. Street realised when he began his surgical training how there was a “real lack of access to good quality, affordable laparoscopic trainers,” and this is how the idea was created.

Inovus’ first device was made by bending a piece of plastic with a heat gun around the side of a fridge, and then drilling some holes in to it. Street and Van Flute took photos of the product and shared the images on their self-coded website. Every time they sold something, they constantly reinvested the money, using it to initially buy a safer method of bending plastic and later, more kit.

As well as the digital simulators, Inovus also manufactures original materials in-house. “Our haptics are real haptics, you don’t need sensors because we’re putting in models that feel like real tissue,” Street added. “The thing that’s giving you all that haptic feedback is a real, tangible model and then we build a digital environment around that.”

Street explained that a major driver of the idea was the desire to allow trainees to perform a virtual procedure in the most realistic way – repeatedly stating his desire for products to be affordable, accessible and functional. Simulators have been developed for multiple purposes including those that can be taken home, and those that are designed for use in an institutional setting.

The materials developed in-house allow Inovus to try and make procedures like appendix surgery and ectopic pregnancies as realistic as possible – the latter specifically having its own mass that can be removed from the model. Polyps and lesions are among the ‘dummy scenarios’ that have been manufactured for surgical practice from silicone material.

The simulators therefore conjure up a mixture of the digital environment and reality. To take it as close to reality as possible, with some of them 3D printed in their entirety like the Bozzini Hysteroscopy Simulators and Sellick Cricoid Pressure Trainers.

Talking about the materials Inovus is developing in-house, Street commented: “Some materials we have are proprietary to us and we spent a long time developing those materials, which allow us to perform electric surgery, use energy devices in theatre on them and they react like real tissue.”

Inovus is putting newly developed materials into its first products to be used – where it looks as if surgeons are cutting through real tissue, attached to an energy device. Street explained: “The first time I put the energy device through it’s probably the most excited I’ve been and there’s lots of exciting stuff that goes on under this roof.

“For me, that’s a game changer. I don’t say these things lightly because prior to this I wouldn’t say that. I’d say that’s a really sensible solution for an unmet need but now we’re developing technologies on the material side, on the way we utilise other technologies like 3D printing, and on the software side which are truly game-changing for the industry.”

Street explained using the company’s own blend of materials has allowed them to manufacture tissue which can be of real benefit to surgeons. He commented: “The materials we use range right through from a whole myriad from different types of silicones – our proprietary soft tissues to our acrylic plastics which we heat and fabricate here right through to the stuff we 3D print such as nylon.

“Everyone uses silicone for soft tissue. The great thing about silicones is when you get your mix right you can create tissues which give you tension when you’re holding them in a medical device or instrument which actually feels like a real tissue.

“With our appendix model, one surgeon I trained with said, ‘how on earth have you managed to make that feel like an appendix? Imagine his surprise the next time I see him when he’s cutting through this tissue, he can use an energy device and it behaves like real tissue. That for me is not only a value added to training surgeons, but also they’re now able to perform procedures super-realistically and they can use the real instruments.”

However, it’s not just surgeons who can benefit from this technology. Street concluded: “For medical device companies as well, we’re offering them a product that shows their product in the best light so when they want to go and demo their product, they’re able to use non-animal by-products so they don’t sully their kit.

“Training surgeons are also able to practice in a safe, controlled environment away from the patients but on a material that’s behaving like a real tissue behaves.”

Inovus Medical feature in the latest edition of Comment

Inovus Medical feature in the latest edition of Comment 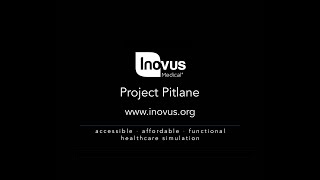